RKB double row angular contact ball bearings are equivalent to two single row paired angular contact ball bearings in the arrangement back-to-back or face-to-face. So they can accept radial loads together with axial loads acting in both directions. The width is narrower than the two equivalent single row bearings in pair. The large double row angular contact ball bearings of RKB production range include bearings specially designed for rolling mills (bearing designation series 305 followed by three numbers). The standardized items of the series ISO 32 and 33 have the filling slot and are non-separable, thus single direction axial loads should be applied. The special bearings with drawing number of series 305 can have either split two-part inner ring or split twopart outer ring. They are non-separable and usually are mounted with radial play in the housing. In the bearings with split two-part inner ring the load lines refer to the back-to-back arrangement. The load lines of the bearings with split two-part outer ring are in the face-to-face arrangement. The main dimensions of bearing series 32 and 33 are as per ISO 15 specifications. The dimensions of bearing series 305 do not follow any standards, but are internationally accepted and recognized in the rolling mill applications. The manufacturing tolerances conform to ISO 492 for normal class specification, but running accuracy grade is in accordance with P6 at least. These bearings are generally produced with a uniform axial internal clearance, but special values suitable for specific applications can be supplied on request. The double row angular contact ball bearings in RKB production program are normally filled with two machined brass cage (one for each ball row). 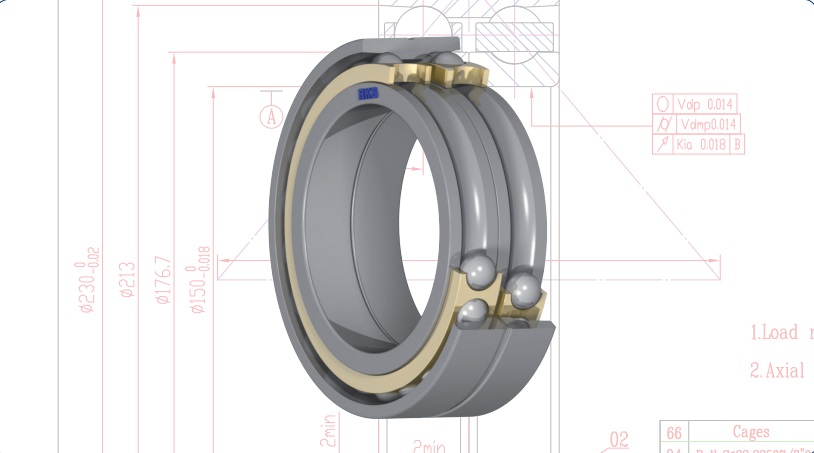